We believe in the power of high-quality, disaggregated data describing conditions in our region to drive better decision-making and more powerful campaigns for equity solutions. We provide a variety of trainings and support to help you use our data. 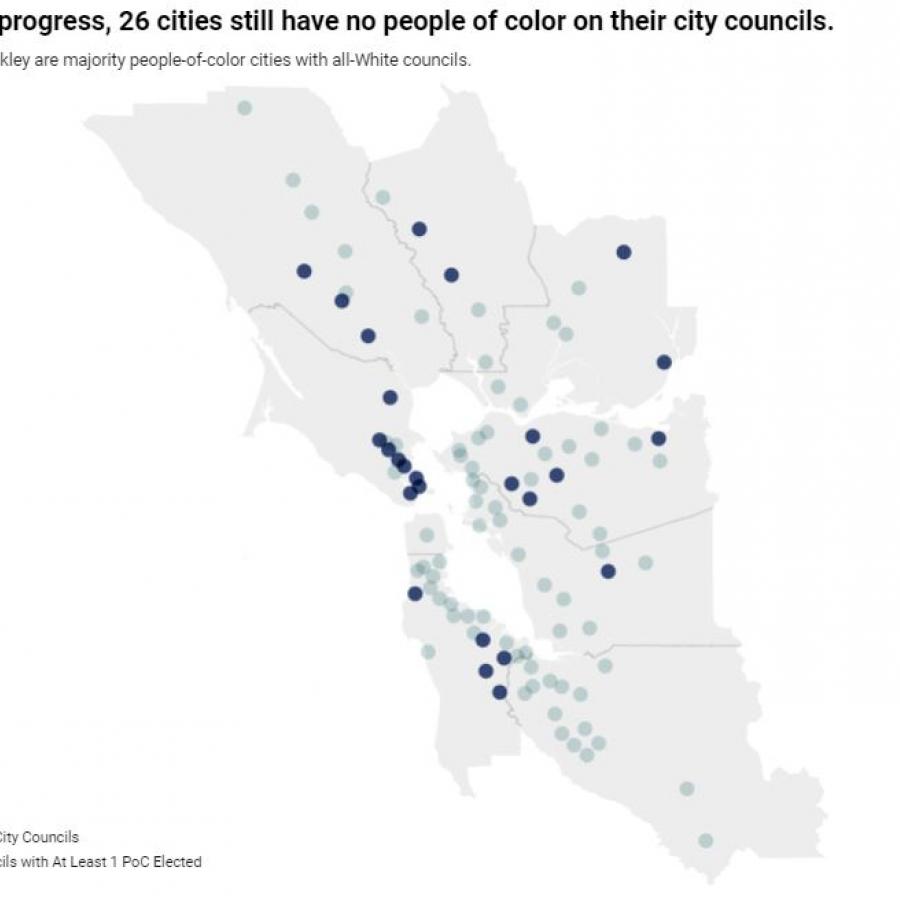 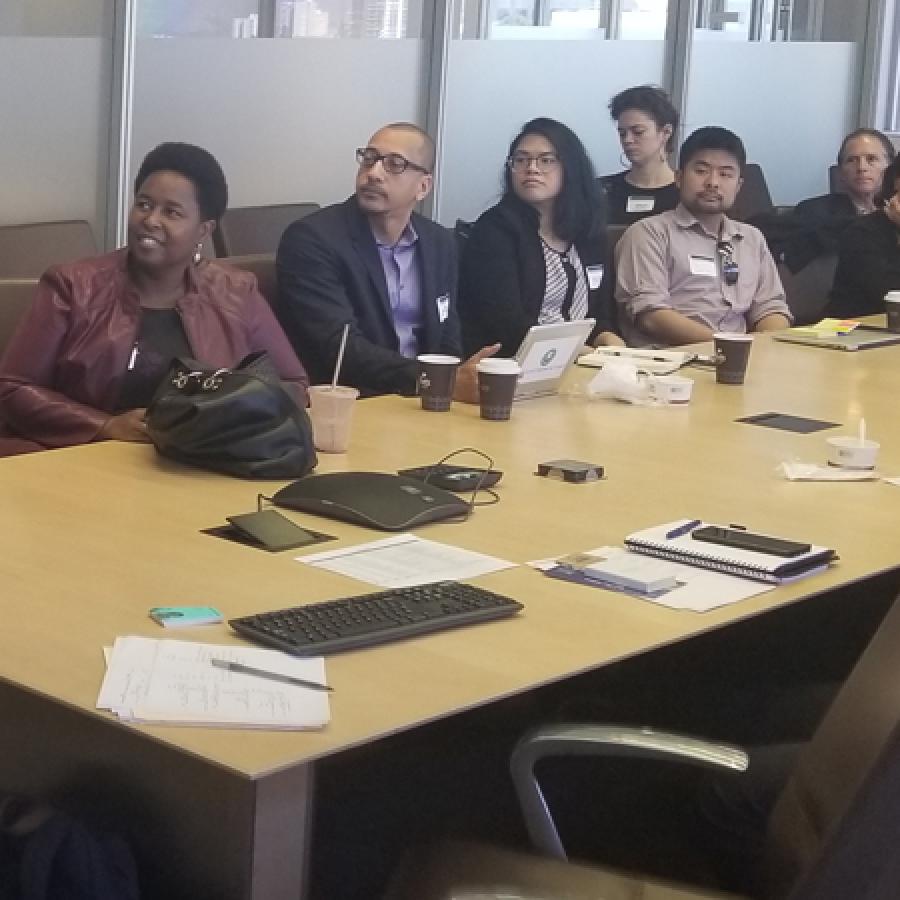 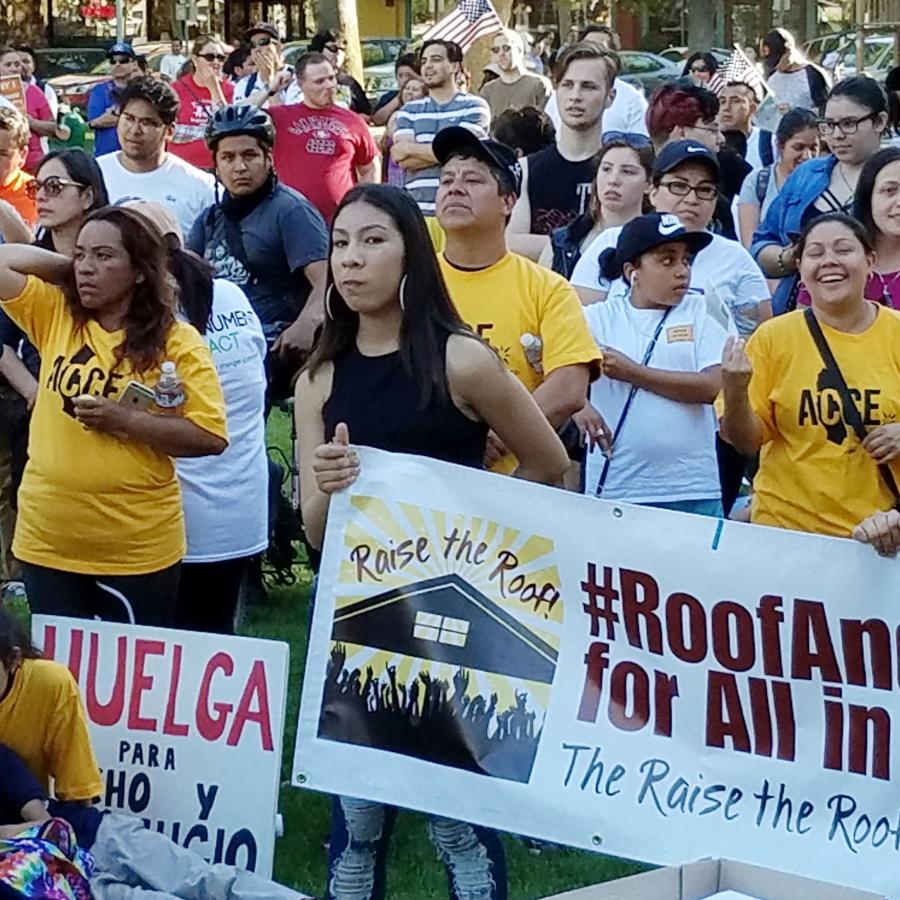 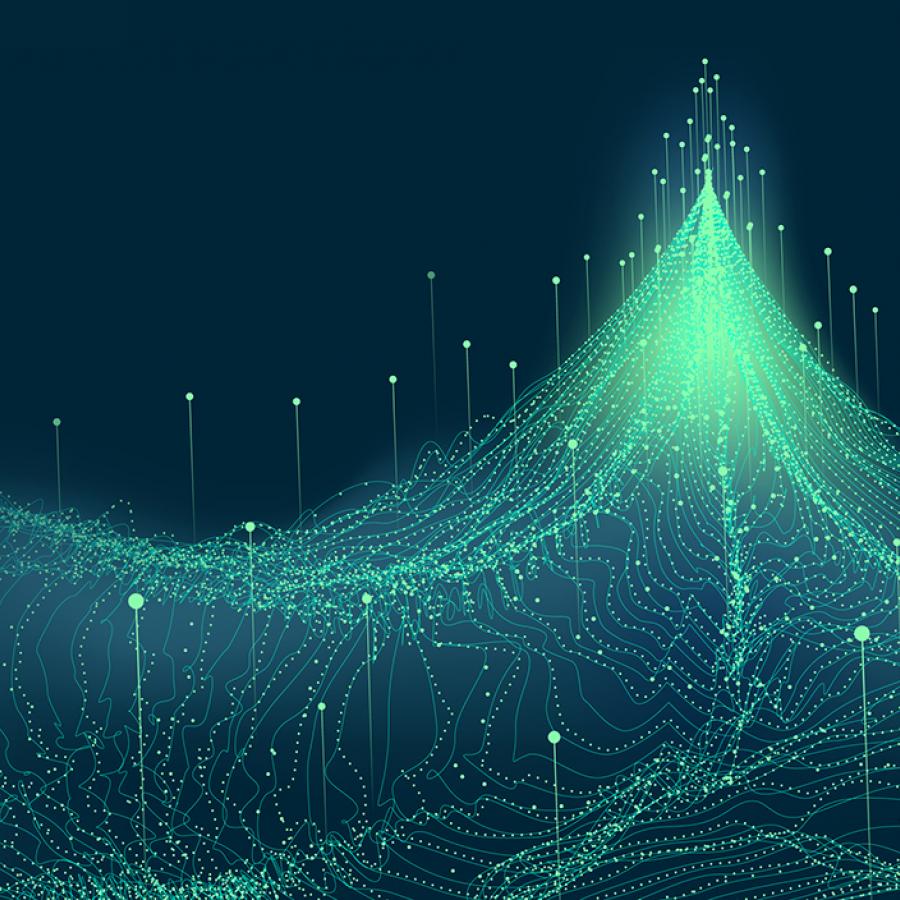 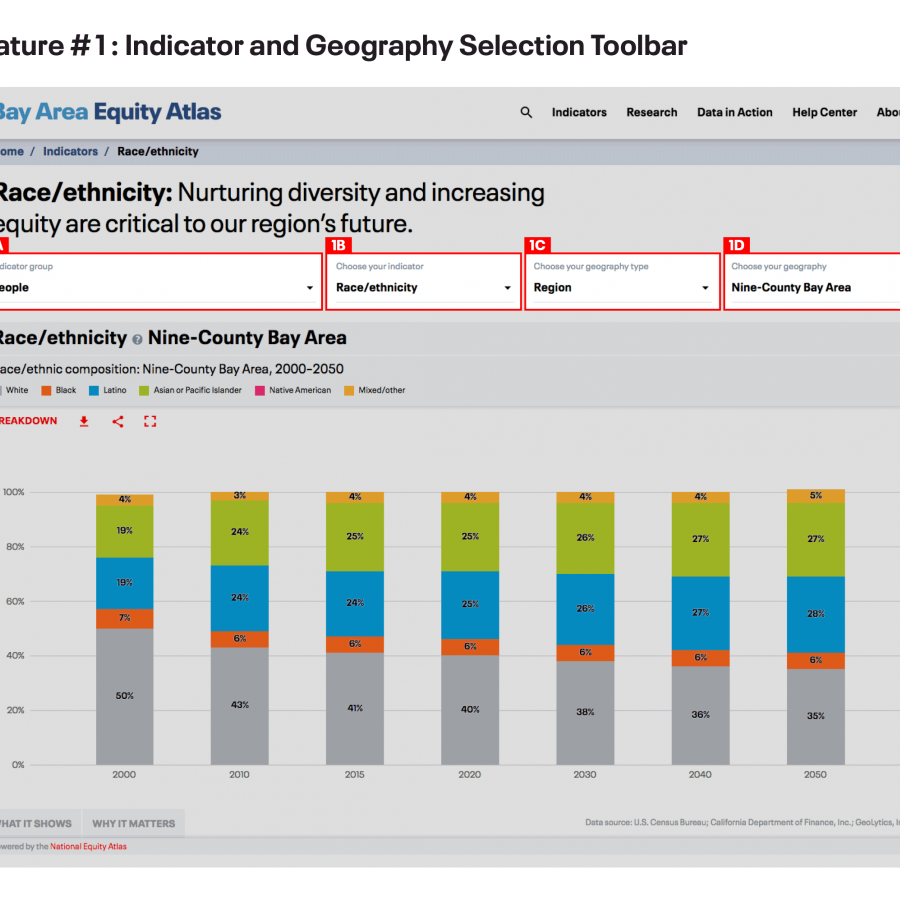 How do I cite the Bay Area Equity Atlas?

We encourage you to use the data and graphics from the Bay Area Equity Atlas, and ask that you cite the Atlas as your source. Here are recommended citations:

How do you define race/ethnicity? Can the data be further disaggregated for additional ethnic subgroups?

In the Atlas, categorization of people by race/ethnicity is generally based on individual responses to various census surveys. For most indicators, people are categorized into six mutually exclusive groups based on their response to two separate questions on race and Hispanic origin, plus one more category for all people of color combined. Further detail about each category is listed on our Methodology page.

There are some inherent challenges to examining indicators by race. We use self-reported racial and ethnic identifications from the U.S. Census. When possible, we provide data for the six major racial/ethnic categories within the Census (White, Black/African American, Hispanic/Latino, Asian/Pacific Islander, Native American, and Mixed/other race), creating mutually exclusive categories by grouping everyone who identifies as being of Hispanic origin in the Hispanic/Latino category. We also present data by nativity and racial/ethnic subgroups defined by ancestry for some indicators when the sample size is large enough (we do not present data when the sample size is less than 100). We sometimes consolidate all people of color into a single category (individuals who do not identify as non-Hispanic White) for specific data points or in cases where the sample size is not large enough to disaggregate the data for major racial/ethnic groups. An additional challenge we face is that the Census historically undercounts people of color—something that is important to recognize but not something we are able to effectively address.

Can the data be further disaggregated for additional ethnic subgroups?

The Bay Area Equity Atlas contains data for racial/ethnic subgroups defined by self-reported ancestry in some indicators. The addition of racial/ethnic subgroup data was driven by the lack of easily accessible data describing the socio-economic diversity within the Asian or Pacific Islander community, which has long been subject to a "model minority" stereotype that does not accurately describe the experience of many groups within the community. However, to provide a comprehensive picture of the diversity that exists within each of the major racial/ethnic categories that are included in the Atlas, we disaggregated the data by ancestry for five of them (all except for the Mixed/other category, for which we think a more appropriate disaggregation would be by the various racial/ethnic groups people identify with rather than by ancestry).

The data for racial/ethnic subgroups allows a user, for example, to examine data on equity indicators for the large Southeast Asian population in San José, CA or the large German population in Santa Clara County, CA—groups that are typically buried in the broader “Asian” and “White” Census categories, respectively. It is important to note, however, that due to sample size limitations, the detailed racial/ethnic subgroup data is only available for geographies with large enough populations of the subgroups being disaggregated.

Why does the Atlas focus on race/ethnicity? What about the other dimensions of inequity?

The Atlas provides extensive data about racial equity and inclusion to allow users to examine how well diverse groups can access the resources and opportunities they need to participate and prosper. Race is a social construct, not a biological one, and in an equitable society, there would not be major differences across racial groups. The differences we do see are primarily due to historical and ongoing policies, decisions, and institutional practices that have racially discriminatory impacts, whether intended or unintended.

We recognize that inequities exist across many characteristics in addition to race/ethnicity and nativity, including income, gender, age, ability, sexual orientation, and neighborhood. Unfortunately, because we are working with survey data and seek to provide data for metropolitan regions, we are limited to the extent to which we can disaggregate the data. We will seek to add additional layers of data to examine other dimensions of inequity as the Atlas evolves.

Where can I find data by ancestry? By gender?

By gender? Data by gender is available for the following indicators: College readiness, Educational attainment, Disconnected youth, Median earnings, Police use of force, Extreme commuting, Housing burden, Business ownership, Business revenue, and Diversity of electeds. Note that these data sources do not provide complete data on gender identity: the surveys only allow for male/female gender identity and do not allow respondents to identify themselves as non-binary or transgender.

Most all indicators on the Atlas are measures of central tendency (e.g. means and medians) based on survey data, and are subject to a margin of error. While we do not report margins of error, we do make efforts to avoid reporting highly unreliable estimates. Unless otherwise noted, for all indicators derived from the Census and ACS summary files, we do not report values that are based on fewer than 100 (weighted) observations in the denominator/universe.

Why is data missing for certain race/ethnic groups in some regions?

While our equitable growth indicators database incorporates a variety of data sources, much of our analysis is based on a unique dataset created using microdata samples (i.e., “individual-level” data) from the Integrated Public Use Microdata Series (IPUMS USA), and Census and American Community Survey (ACS) summary file data for three points in time: 2000, and the five-year pools of 2006 through 2010 and 2011 through 2015. The IPUMS microdata allows for the tabulation of detailed population characteristics, but because such tabulations are based on samples, they are subject to a margin of error and should be regarded as estimates—particularly in smaller regions and for smaller demographic subgroups. In an effort to avoid reporting highly unreliable estimates, we do not report any estimates that are based on a universe of fewer than 100 individual (unweighted) survey respondents. Similarly, no data from the Census and ACS summary files is reported if based on a universe of less than 100 (weighted). See our summary of data sources and geographies for more information.

Where can I find data on: the Native American population? People with disabilities? The LGBTQ community?

People with disabilities? We don't currently have any data for disabled people. We know that local advocates often need data to describe their demographic and economic realities. We will try to add more indicators to the Atlas overtime when possible.

The LGBTQ community? We do not currently have any data for the LGBTQ community in the Atlas because this data is not collected in the data sources that we use. Per the above note on gender, this is an important correction needed and we advocate for including non-binary gender categories in surveys. We will add additional indicators to the Atlas over time and are looking for data by sexual orientation and gender identity, particularly for the transgender community, for the Nine-County Bay Area. Please share suggestions for data sources with us at info@bayareaequityatlas.org.

Who can I contact with technical questions about the data and methodology?

We provide an overview of our overall methodological approach on our Methodology page, as well as a detailed methodological breakdown for each indicator on our People, Place, and Power pages. If you have additional questions about the data or methods, please contact Justin Scoggins, Data Manager at PERE, at info@nationalequityatlas.org.

How often will the data be updated? What geographies are available on the Bay Area Equity Atlas?

Yes, you can. Our aim is to democratize data and make it available to you to explore and use. If you click on the downward facing arrow on each breakdown, you will find the option to download an excel sheet with the underlying data for the breakdown along with options to download an image or a powerpoint presentation. If you would like access to other data, please email us at info@bayareaequityatlas.org  detailing your request and plans for use, and we will try to package it for you.

Many of the data points for 2010 and 2015 are based on a pooled sample of five years of annual survey data (2006 through 2010 and 2011 through 2015, respectively) from the American Community Survey. Because a single year of the ACS data only covers about one percent of the U.S. population, five years of ACS data were pooled together to improve statistical reliability and to achieve a sample size that is comparable to that of most data points for 2000, which are based on the “long form” of the decennial census.

What are Public Use Microdata Areas (PUMAs)?